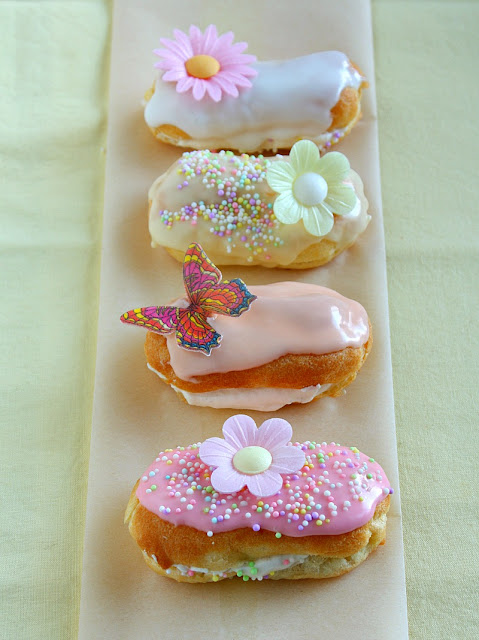 These little eclairs are the perfect treat to make for a special occasion. They aren't as time consuming as normal eclairs since they are filled with vanilla whipped cream rather than a custard filling, but they taste every bit as good and make a delicious change to traditional chocolate eclairs. Now they might not look perfect but they are homemade and made with love so for those of you in the UK why not treat your Mum this weekend and make up a batch of these to celebrate Mother's Day. She'll certainly thank you for them!

This recipe is the same as my recipe for Profiteroles I've just changed the quantities of cream filling and the topping. 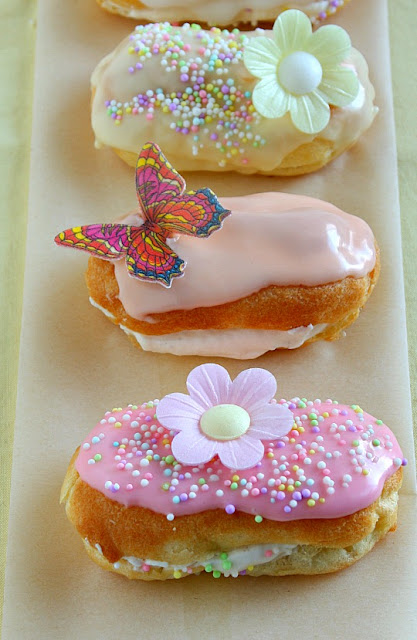 Preheat the oven to 425F/ 220C. Line a large baking sheet (or 2 smaller ones) with parchment paper and set aside.

In a medium sized pan melt the butter with the water. Bring to the boil then remove from the heat. While the butter is melting sift the flour onto a sheet of parchment paper. Tip the flour off the parchment and into the butter and water mix and beat with a wooden spoon until it forms a dough. Return to the heat and continue beating until the dough forms a smooth, shiny ball that leaves the side of the pan. Remove from the heat and leave to cool slightly for roughly 3 minutes then add the eggs gradually, beating as you do until the mixture forms a shiny and thick paste.

Spoon the pastry mix into a piping bag fitted with a 2.5cm nozzle (or alternatively you can use a large sandwich/ Ziploc bag and then just snip the end off so the opening is approximately 2.5cm) and pipe roughly 2 ½ - 3 inch lengths onto the baking sheets leaving room in between each one to allow them to expand.

Bake the eclairs for 15-20 minutes until they have risen and are crisp and golden. Remove from the oven, then using a skewer, make a small hole in each end of the eclairs so that the steam can escape. Put them back in the oven for a further 2 minutes then remove and place on a wire rack to cool.

While the eclairs are cooling, whip the cream along with the sugar and vanilla until you have soft peaks, but be careful not to over whip. Using a sharp knife (I find serrated knifes work best) cut the eclairs in half but not all the way so they can open up like a book. Fill a piping bag with the cream and then once the eclairs are completely cool pipe the cream into each one, being careful not to over fill. Pop them into the fridge to chill while you make up the icing.

Sieve the icing sugar into a bowl and add just enough water so that you have a runny icing that is still thick. Don't be tempted to make it too thin as it will just run of the eclairs (trust me!). Divide the icing into as many bowls as you like depending on how many colours you want, then add a little colouring to each bowl until you get your desired colours.

Using a spoon or small offset spatula (or even a knife, using the back of it and not the serrated edge) spread a little icing on each eclair then if you like top with your decoration of choice. Once they have all been iced and decorated return to the fridge for 10 mins (or more if need be) before serving and enjoying. 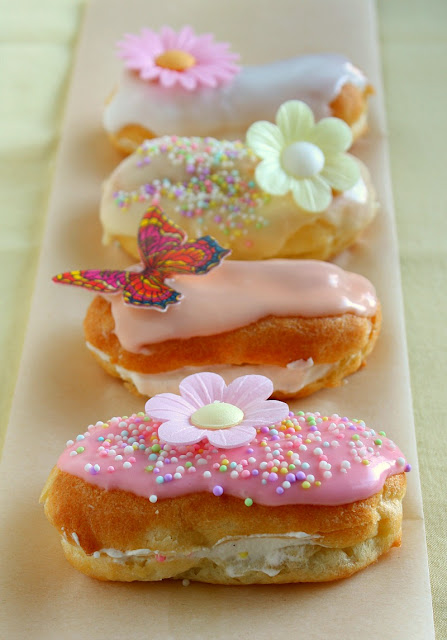