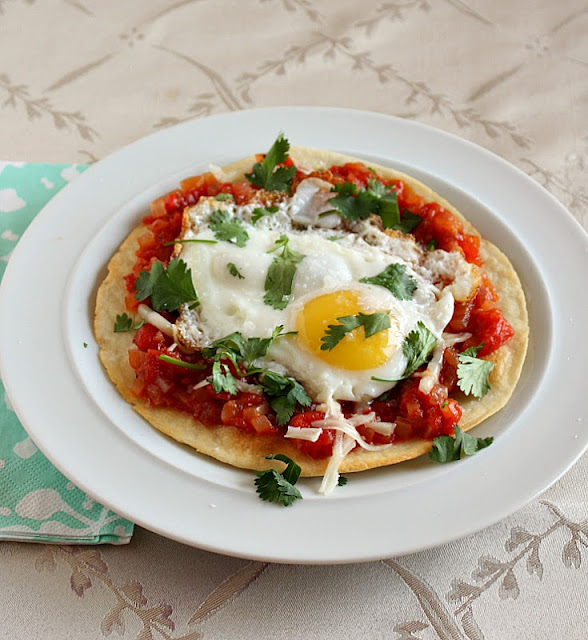 On Sunday morning hubby got up bright and early (by which I mean 6.30am!) to go and play golf, so it was just Wee One and I relaxing and enjoying the sun streaming through the windows. Generally I'm not a breakfast person....during the week I have a quick bowl of cereal, bircher or grab a slice of toast but things change on the weekend which is when I really enjoy breakfast. Normally on a Sunday we always have a brunch but since it was just the 2 of us (and Wee One had already had his usual feast of cereal, yogurt and a ton of fruit!) it didn't seem right but then I remembered a recipe I had seen in Thomasina Miers book Mexican Food Made Simple for what she calls “The Great Mexican Breakfast”. It looked amazing and the only reason I hadn't made it before was because of Mr. Vanilla's fussiness for tomatoes and the fact that there can't be any “chunks” whatsoever! It was the perfect time to make it.....a little self-indulgence and a yummy breakfast for myself while he was enjoying himself on the golf course. This isn't a breakfast for when you are in a rush as it takes 30 minutes for the sauce to cook and reduce but it is so worth it...(and lets be honest, how long does it take to cook some bacon or sausages?!) All I can say when I ate it was “Wow!” and then wanted to rewind time and eat it all over again! The crisp and golden tortilla with the spicy tomato sauce, and perfectly fried egg with the runny yolk was the ultimate combination and is quite possibly my new favourite breakfast! Actually it is my new favourite breakfast and therefore I thought the perfect recipe to post just in time for mother's day because if your mum (or yourself!) likes spicy Mexican food then this is the ultimate breakfast to treat her to....you won't be disappointed and neither will she. And of course so that I could share this recipe with you, I had to have it again on Monday so I could snap a quick pic before devouring it again.....it's a tough job!


I adapted the recipe slightly to suit my tastes but all thanks goes to Thomasina Miers and her recipe from Mexican Food Made Simple.

I used a red Thai chilli for this as generally that's what I always have in the house but you could any chillies that you have – just make sure it has a bit of a kick to it as you want this sauce to have a bit of attitude. 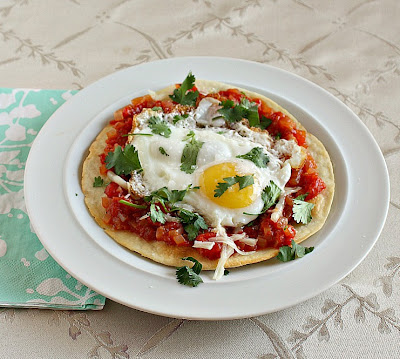 To serve:
2 small tortillas – I use flour as I can get them easier but feel free to use corn tortillas instead
1-2 tbsp fresh coriander (cilantro) roughly chopped
2 large eggs (organic if possible)
30g cheese (I used Smoked Gouda which was delicious but use any cheese that you like)

To make the sauce heat 1 tbsp of olive oil in a medium sized pan then add the onion and chilli. Cook for 5-6 minutes until softened but not coloured then add the garlic and cook for another minute before adding the tomatoes, Worcestershire sauce, sugar, salt and pepper. Simmer everything together then leave to simmer very gently for 30 minutes until thickened and reduced. If it starts to get too thick thin down with a little water.

Just before you are ready to eat add the remaining 2 tbsp of olive oil to a frying pan and fry the tortillas on both sides until crisp and golden. Put onto individual serving plates or if you prefer wrap in foil and keep warm. Using the same pan over a higher heat fry the eggs, spooning some of the oil over the top of them so that the yolks are cooked but still runny and the whites nice and golden and ever-so-slightly crisp on the edges.

While the eggs are cooking, spoon the tomato sauce over the tortillas then sprinkle with some coriander and the grated cheese. Top with the egg then sprinkle over some salt and a little extra coriander. Eat at once while hot and delicious with a good cup of coffee to really waken you up!
~~~

If this doesn't work why not treat your Mum to some of these delicious options for breakfast in bed. All you need to go with them is some tea or coffee, a glass of Orange Juice and maybe a flower or two!


Or why not really treat her and make her an Afternoon Tea that she'll never forget!
Posted by Unknown at 4:30 AM