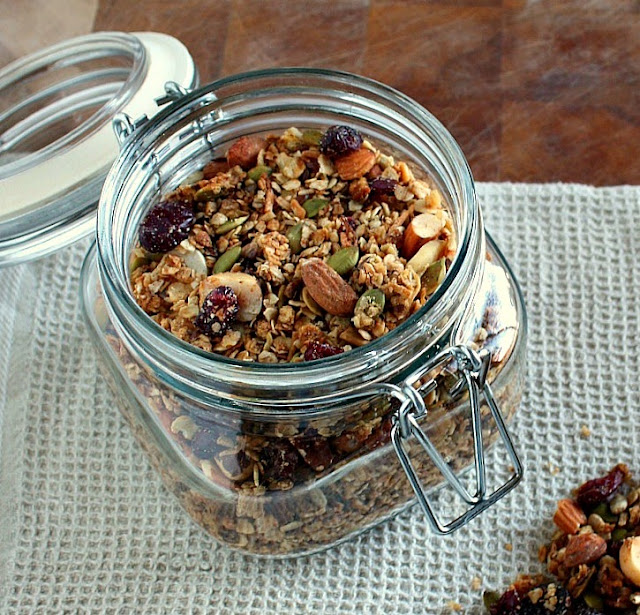 I've had this recipe tucked away for a long time. Stashing it away for another project or at the least a 'reserve' when I hadn't managed to photograph a new recipe. But then it occurred to me that I really should post it (and not just because I have nothing else to post this week!!) because it is incredibly popular in our house and I feel like I am always making up a fresh batch!

When my husband is in town during the week this is his favourite breakfast to have. He can either have a bowl with milk at home before heading to work, or if in a rush he grabs some and takes it with some yogurt to enjoy as soon as he has some time!

The recipe was adapted from one I read in The Meat Free Monday Cookbook but after doing quite a bit of research on Granola recipes, I found that honestly they are all pretty similar, and really it's just about finding a combination that you like then if need be, adapting things slightly. I'm not going to lie, this isn't a cheap version of Granola but in my opinion it is worth every penny! This version really has a little bit of everything in it so it's a big hit in our family and the touch of cinnamon adds a delicious warmth to it. It makes a lot which I like as it lasts a little longer but if you prefer you can easily half the recipe.

Enjoy it with milk, to snack on by itself, or my favourite way – sprinkled over yogurt.

{I like to use cups for this recipe rather than measuring everything out as I find it a lot easier. If you don't have specific measuring cups just find a small mug or coffee cup and use that – the main thing is just to keep the quantities the same once you find your cup of choice!}

Preheat the oven to 350F/ 180C and line a large baking sheet (or 2 smaller ones) with baking parchment - trust me, this will help with clean up!

In a large bowl mix together the almonds, pecans, brazil buts, oats, all of the seeds, coconut and the cinnamon. Mix well then add the oil and honey. Stir well so that everything is evenly coated with the oil and honey, mix then transfer to the baking tray (or trays). Spread the granola out evenly over the tray and press down slightly with the back of a large spoon or spatula, then bake in the oven for 30-40 minutes, turning half way through cooking so that it gets evenly browned.


Once the granola is golden and crisp, remove from the oven and allow to cool for 5-10 minutes then add the dried fruit. Transfer to an airtight container and enjoy however you like. 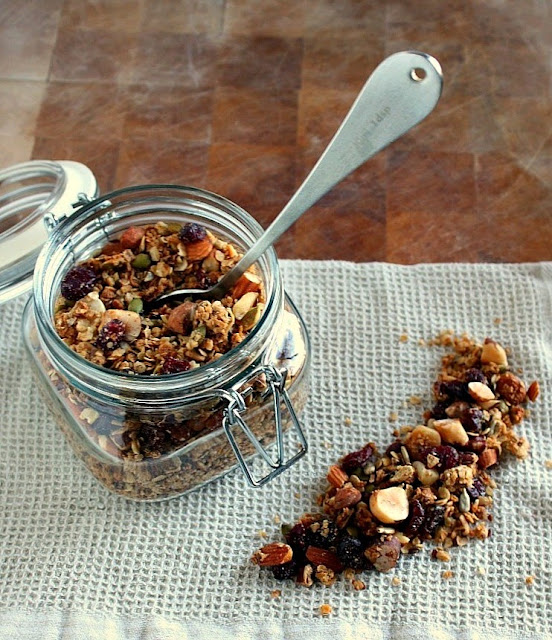