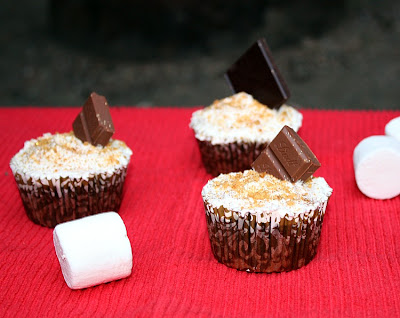 It's my sisters Birthday on September 6th but she is away travelling through America so I decided to give here a surprise early Birthday meal before she left! As it happened her last weekend before she was leaving was when we were all camping at Long Beach, so I decided the perfect Birthday cupcakes would be to try and make some S'more Cupcakes!


Growing up in Scotland, our sweet camping treat was simply toasted marshmallows so I had never heard of S'mores until I moved to Canada. That being said I had never tried them(until that weekend!) but understood the concept and thought a S'mores Cupcake would be delicious! Chocolate cupcake sponge topped with a fluffy and light marshmallow icing and finished with some cookie crumbs, a square of chocolate and of course some edible glitter! They turned out to be delicious and were the perfect way to celebrate her birthday while camping.

As usual I used the basic sponge recipe from the Hummingbird Bakery Cookbook – this time opting for the chocolate cupcake recipe (with a little extra vanilla added), then using my own icing and toppings.

For the icing I used Fluff – the marshmallow spread in a jar. I hadn't eaten Fluff since I was about 14 when it first made an appearance in the UK (round about the same time as Tab Clear – that clear cola - came out!). Funnily enough I think I tried it once and that was it, however I have to say using it here in this icing is the perfect, and delicious way to use it! A word of warning though – it is messy and sticky to deal with, but isn't that the whole point of S'mores!?! 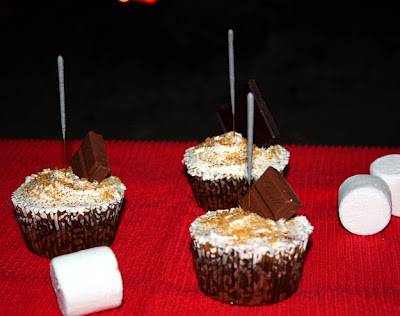 To decorate:
2 Graham crackers
Squares of chocolate – your choice of milk or dark (I did both)
Edible glitter – I used a mix of Gold and Marigold (optional)

Sift the flour cocoa power into the bowl of a Kitchen Aid (or other freestanding mixer) then add the sugar, baking powder, salt and butter and using the paddle attachment mix slowly until everything is combined and you have a sandy consistency (if you don't have a Kitchen Aid use a hand-held electric beater). While the mixer is running, slowly pour in half of the milk and mix until it's just incorporated. Add the egg to the remaining milk along with the vanilla and continue beating until it's mixed in. Scrape down the sides of the bowl to make sure everything is properly mixed but be careful not to over beat the mixture.

Evenly spoon the cake mixture into the cupcake cases and bake for 20-25 minutes until the sponge bounces back when touched (with my oven 22 minutes works perfectly every time) and a skewer comes out clean with put into the centre of the cake. Leave to cool for a few minutes then transfer the cupcakes onto a wire rack.

To make the icing, put the butter into a mixing bowl then sift over the icing sugar. Beat well until it is pale, light and creamy. Add the milk, vanilla and marshmallow fluff (this is the sticky messy part!) then beat well. It will almost be stringy to start but keep beating until you get a smooth, creamy and fluffy icing.

Once the cupcakes have cooled completely ice them with the Marshmallow Icing using a spatula (or if you prefer, a piping bag). To finish off the cupcakes put the Graham crackers (or digestives) into a sandwich bag and crush using a rolling pin until you have a fine rubble of crumbs, with a few slightly larger pieces in there as well. Sprinkle the biscuit crumbs over the cupcakes then add a sprinkling of edible glitter if you have some. Finish with a square of chocolate then serve and watch them disappear! 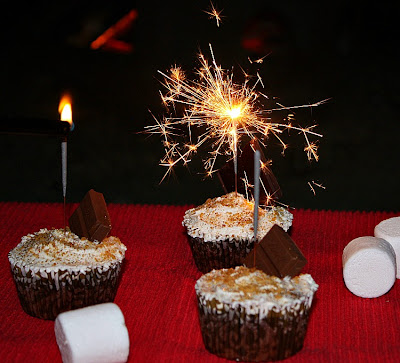 {Looking at the photos I could have added more icing to my cupcakes.....there was more than enough left over, but it was getting dark as I was icing them and was in a bit of a rush!}

﻿
*One Year Ago - Tomato Soup
**Two Years Ago - Spaghetti with Cherry Tomato Sauce
Posted by Unknown at 6:00 AM